Politicians and the business community at large would have us believe that the problems in our economy are a result of poor business confidence and that the resolution to our socio-economic issues would be resolved by boosting confidence in the consumer. Confidence…. What are we actually talking about when we discuss consumer confidence? 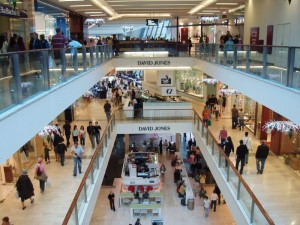 Shopping, strong consumer confidence indicates to corporations that people will head out and spend their hard earned cash on goods and services in a repetitious fashion, empowering growth and securing job stability in the market. Nowhere in that equation is there concern or quarter given to biosphere sustainability or the impacts of a throw away consumption model, built around perceived obsolescence, on our children’s and grandchildren’s futures. The term environmental sustainability is not in the lexicon of our business community at large, the focus is on profit projections, consumption trends, cuts to financial costs and marketing to capture repeat custom.

An economy that has its basis in environmental concern, sustainability, equality and the type of freedom that does not require us to be told we are free: That is a direction we can head in as a species. In the direction of what has been termed a Resource Based Economic Model (R.B.E.M.).

What is a Resource Based Economic Model (R.B.E.M.)

A R.B.E.M. is more than an economic system; it is a way of life, a holistic social and economic system that requires the Earth’s resources be viewed as the common heritage of all the Earth’s inhabitants. That promotes the understanding that the Earth is not something to be divided and owned, but rather is our shared home which requires our collective stewardship. It makes use of resources, not money and concentrates on equitable distribution in the most humane and efficient manner possible. It provides all goods and services to everyone without the use of money, barter, credits or any other form of debt of servitude. Our current scientific understandings and technological advancement can easily allow us to provide access abundance for all the worlds population and that is the aim of a R.B.E.M.

“We cannot solve our problems with the same thinking we used when we created them.”
– Albert Einstein

The implementation of such an economy will require a fundamental values shift. Hoarding, greed and superficial commercially manufactured desires, which are so prevalent in our society today, have no place in such an economy. It is the pervasiveness of this values disorder that can get in the way of understanding or even entering into discourse about this type of economy. Just as one must be prepared to understand that our monetary economy is not inherently evil, as it was developed in a time of real scarcity, as a mechanism by which to ration as fairly as we knew how, one must also accept that over thousands of years things have changed. We understand more about our natural world and our technical capabilities have exploded beyond what our rationing system can cope with. It is for this reason that we must accept that questioning our current economy and its fundamental mechanics should not be seen as taboo, but as a part of our natural progression as a social animal on this planet.

As a species we have developed a tendency to mistrust each other. When operating socially from the confines of an economic system that requires us to strive to gain differential advantage over one another in order to elevate our standard of living, this should come as no surprise. Such permeating mistrust runs the gambit from the rational; having a reluctance to divulge personal information to unknown people over the internet, through to the irrational; being convinced that scientists are working in collusion with government agencies to gain control over us via a climate change conspiracy. (Article to come) This propensity to see conspiracy everywhere shows up as soon as we begin to discuss a computerized system of accounting planetary resources, which when looking at something as complex as monitoring resource abundance/scarcity on a global scale is absolutely necessary.

The Evil All Controlling Economy Supercomputer 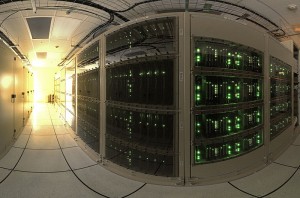 Wide-angle view of the ALMA correlator by ESO CC BY 4.0

It is a commonly held misunderstanding that in a resource based economy there will be a centralised supercomputer controlling our lives, dictating what we can and cannot do. While it is true that computers will be needed to collect and store data in relation to resource monitoring systems, the idea that it will be one all seeing, all controlling computer overlord is a misnomer. What we could expect is that there would be many computers all over the world collecting and monitoring data in relation to regional resources and overall use. This would not include data on individuals, but on overall collective use and regeneration of resources constantly updated to give the most accurate assessment of levels of resource availability. This would not make decisions for us, but rather empower us with the knowledge of current resource availability enabling us to contemplate when, how and what we would use specific resources for. As a simple example, if we became aware through resource monitoring that at a specific global location water was becoming scarce, we would be able to perhaps choose to have shorter showers, have water imported from another location, or investigate improved ways to put that resource to use in the interest of sustainability. It would be people, the people living in the area, that would make those decisions. Not some computer, the computer would do nothing more than allow us to be aware of impending resource scarcity, how we reacted to that information would be up to us.

Again it must be understood that we are not going to awaken in the morning and suddenly find ourselves living in such an economy, before that can happen there are fundamental things that must change about the way we view our planet and each other. We must undergo a values shift, which will allow us to see each other as brothers and sisters sharing a small delicate planet — that it is in our interests to nurture as opposed to stripping bare in some vain effort to get ahead of each other. This wont happen overnight, but it has already begun to happen all over our world. The more time we spend understanding our biosphere and how that relates to the welfare of not only ourselves but every life form we share our home with, the more inclined we will be to question our current systems approach to life on earth. The interconnected relationships we have with not only each other, but the planet itself will become increasingly apparent and will implore us to reassess our social methods on a continuous basis, keeping us from entering into some utopian stagnation, but instead encouraging us to constantly update our methodology to come into line with up to date understandings and environmental circumstances.

It is when it becomes accepted that a system has failed that emergent ideas can take hold and be allowed to flourish. It is long since past time to acknowledge that our economy as a system is not just failing, but is clearly detrimental to all the systems that have been built up around it. The symptoms of that failure are prevalent in the world around us and to deny their existence or pontificate about superficial reforms could come at severe cost to our entire species.

“A planned economy, which adjusts production to the needs of the community, would distribute the work to be done among all those able to work and would guarantee a livelihood to every man, woman, and child.”
– Albert Einstein

Feature Image
Money by Andrew Magill CC BY 2.0
Total US Debt to GDP by Fotis Bobolas CC BY SA 2.0

Related posts:
Automation Will Change the World Sooner Than You Think
A Growth Economy is an Anti-Economy
A World Without Debt
Why a Basic Income Matters in System Transition
A like is great,but a share goes further.