The eight wealthiest men on our planet combined possess as much wealth as half the global population. At the same time close to two billion people go hungry every night. This is disgraceful to say the least and a sobering example of what we have allowed ourselves to become as a society.

Yet at the same time it’s not the fault of these eight individuals any more than it is our own. What do we expect will happen in society when the rules which govern outcomes describe the goal is to acquire as much as possible? When we gauge human worth on the size of a bank account and property holdings.

The real problem here is not that eight people have as much combined wealth as they do, it’s that the cause goes unseen by the vast majority. We have created a social structure based on unequal distribution of wealth and access to the necessities of life. This creates growing inequality and inequality is harmful to society at large. 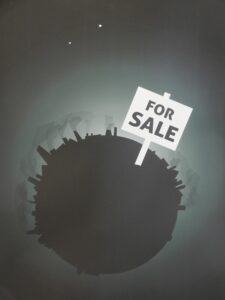 We are all bombarded with advertising everyday, made to feel like we need the new thing, whatever it may be. Of course when success is derived from sales of a product or service then we will always be sold to. Someone will always sell us something when the sale things is what drives their level of success.

The entire system is entirely decoupled from our natural world. Our pursuit of stuff must never be sated as it is continual material consumption which drives our market based society. This is what creates wealth and keeps people in jobs. Jobs we need should we wish to be able to pay for the luxury of clean water, food, and shelter. While our desires for stuff must be continuous our planet is finite.

Because our planet has limits, because there’s not an endless supply of resources to use to make things this system will eventually crush itself. However, along the way to that inevitable end there will be extreme inequality, which generates low self worth and desperation. Desperate people, when desperate enough, will turn to acts we deem as criminal to get what they want or need.

To be sure as our advancing technological ability races ever forward employment opportunities will be continually eroded. With technology displacing workers the numbers of desperate people on our planet will dramatically increase. Without system change in the future it’s likely two people will boast the combined wealth of the rest of our population. That outcome may not be all that far away.

We can be as disgusted as we like about inequality. If we fail to recognise and enter into serious discourse about the cause then little of substance will change for the better. We have written about an alternative economic model, it may be time to begin to have widespread discussions about it or something similar. Unless of course we are happy expressing disgust about vast inequality gaps and people starving while actually not doing anything about it.

“It’s disgusting, let’s be honest, it’s absolutely grotesque. That’s eight people, eight men, who own the same amount of wealth as 3.6 billion people. That’s huge. At the same time, we have 1.9 billion people going hungry every night, we have close to a billion people who are living on less than $2 a day. It’s completely unacceptable,”
Ana Arendar Oxfam policy adviser

Feature Image
A mass grave for children in Dadaab by Oxfam East Africa CC By 2.0 Pica by Ahmad CC By SA 3.0