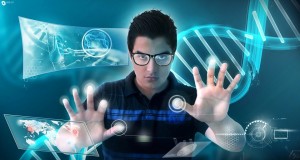 “Science & Education, when devoid of a Social Conscience or Environmental or Human concern, are meaningless” ~ Jacque Fresco
This is becoming increasingly the issue of our age in a world of impersonal checks, inspections, scans and interrogations.

A world in which the individual is assessed, numbered and authorised and ultimately reduced to the ignominious state of binary bits.

This Merry-go-round of contemporary life, this carnival reflects and paints in lurid brushstrokes the vivid nightmares of a Lunatic who has lost his way and become deaf to his inner-nature.

Technology, despite it’s considerable seductive charm is in the modern ethos no longer valid or legitimate unless it is grounded in the Prime Directive i.e our harmonious, self-sustaining, prosperous survival.

Our Technology is the keen dual-edged blade of man’s intellect.

It is a choice as Stanley Kubrick posited so dramatically and evocatively in the movie 2001 : A Space Odyssey.

A choice between Heaven and Hell.

Between Creation and Destruction.

Between a Tool and a Weapon.

Thus Technology is simultaneously our Liberator or our Enslaver, our Salvation or our Damnation.

This is the stark inevitable choice we face.

We cannot afford to shy away from difficult issues which produce cognitive dissonance within us.

Our issues are too serious for anything but complete and utter open transparent dialogue and debate regarding our future survival and that of our species.

We can either use our technology to pull ourselves up by our own boot-straps, or we can choose to be seduced and trapped into a consumerist prison of our own making, with technology sealing the lock.

No amount of politics or legislation will disentangle us from the neon coils of our own prison.

Technology was always the process by which we change, evolve.

We have the means within our reach, to use our technology to solve our current problems which are transparent and obviously the result of our addiction to oil and cash.

This has produced a chain-reaction causing not only exponential growth of the human species but a whole host of addiction problems and accompanying irrational behavior which are now in a sick symbiotic whirlpool, inextricably linked as a part of that greater cataclysmic ‘shift’ occurring across the globe.

A shift of power and wealth which can now in retrospect be seen as an inevitable consequence of a free unfettered capitalist market.

This wealth and power are being siphoned off to the 1%, whilst the American Congress sits like a petrified forest paralyzed through ossification, a result of too much cash coursing through their veins…Junkies On Cash.

So our problems are severe, and we have little time to spare due to the iniquities of life in a capitalist paradigm as our time is not our own.

Solutions are never easy, but it is clear they start with each and every one of us.

We are beginning to identify how our technology transforms us, allowing ourselves to become more aware, more in tune with the ‘Hive-mind’ and more aware of technological and scientific solutions to our problems.

We need to first of all consider that we are part of a greater transformative pattern.

A part of a giant cellular organism.

Now, let us take a glimpse at a mechanism of change.

There was a recent military funded psychological study which produced some unexpected results.

This study attempted to measure when the threshold ‘tipping point’ in a society or social grouping occurred, wherein a particular idea or meme achieves a significant foothold in the collective psyche.

Despite the inherent difficulties involved with this kind of ‘science’, the results are nonetheless still quite interesting.

They show us that an idea or a meme can spread rapidly, somewhat like a virus or a flame and that once a figure of approximately 10% has been achieved, critical mass is reached so to speak, meaning from that moment on an idea will inevitably take hold in the greater collective.

This military-funded psychological study gives us a clue as to how our wondrous transformation may yet be achieved.

Our technology is uniquely suited for this task of human transformation as it is an extension of ourselves and our intelligence, and therefore it is a part of us.

This special relationship with our technology has created a feed-back loop which will continue to grow exponentially, as it has provided us with a brand new, unique perspective on ourselves.

Our modern weltanschauung, or world outlook, is something which was clearly identified by Marshall McLuhan in the ’70’s, as we looked up, for the first time, into our Global Village.

This process of becoming fully aware and self-actualised for the human species and therefore ultimately capable of conscious transformation, is something which involves our increasing access to information, to social networking, communications in general, and the tech which is uniquely providing for and enabling these to evolve at an ever increasing pace.

This is the feedback loop, and it’s pulse is quickening…

Although the Internet is our best weapon for change, and obviously needs to be guarded vigilantly, ultimately our Salvation or our Damnation remains the choice staring paradoxically at each and every one of us, as we remain cells in a greater collective called the human organism.

Technology affords us the rather unique capability of transforming ourselves in many wondrous ways some yet to be revealed.

Thus Spake Zarathustra or depicting the Rise of the Superman in that masterpiece of
celluloid by Stanley Kubrick: 2001. 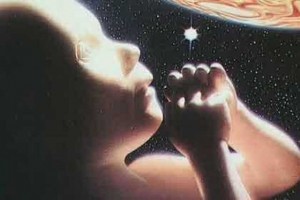 There remains another more direct method of using our technology as a solution to the world’s current problems.

To see this in perspective, we first need to accept that in order to build a better world, fighting the present system, in a mano-to-mano hands on approach i.e from within ‘Crowds’, is short-sighted in the extreme.

Although they can be learning centers for participatory democracy and other activist awareness raising activities, crowds are not useful locations for rational thinking nor has violence ever produced a harmonious, prosperous outcome for all.

Our fight needs to be on intellectual grounds and in cyberspace which is where our future lies.

No amount of brute force from the average citizenry can physically go up against the fully militarized arm and might of an out of control fascist kleptocracy.

Instead of wasting our energy and resources attempting to fight the State, let’s transcend the State completely and make it obsolete.

In other words let ‘US’ all be the catalyst for change.

Completely negating and by-passing the corruption , ignorance and inefficiency which are the hallmarks of our traditional model.

Let us use the best minds and the most current scientific data to construct our first self-sustainable city.

When the rest of the world becomes aware of how a harmonious balance can be achieved with fresh clean water and food technologies through the efficient use of automation etc., using the latest disciplines and scientific advancements for our energy needs, they will beat a path to our door. 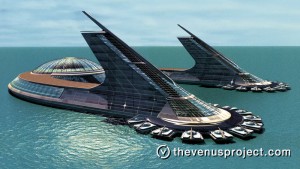 These were Visionaries who used their Art in a divine union with science to bring man forward intellectually and culturally via the same influences referred to in the aforementioned military study i.e via an innovative idea or a social meme.

All of them naturally wrote about our technology, and thereby helped to create and change the pathway of our evolutionary future.

Collectively Science Fiction has done more to influence our society and our evolution as a species than just about any other genre of books that I can think of, with the exception of Scientific journals.

If you inspire man’s imagination with Science, if you spark the mind & the emotions, the body will follow. 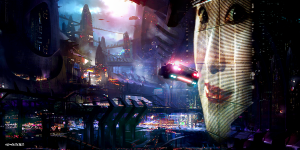 There is an ancient couplet that echoes Jacque Fresco’s concerns in my opening quotation of his, which has recently surfaced again in my memory, author Anonymous :

In other words we will require both intellect & feeling in order to obtain a World which is grounded in a new-age ‘Value system’, one based on the ultimate value, our own prosperous survival.

There is a final piece in the riddle of man’s Social Rebirth.

This is the profoundly simple trick of acting ‘as if’ the psychological shift we so desperately require had already happened.

This is an old Shaman trick and has been known to practitioners of the arcane, dark arts for centuries.

What the mind believes, the eye sees, eventually shaping reality a little closer to your heart’s desire.

Unhappily it is only those of us who have managed to escape the mental confines of the consumerist dream who are already familiar with this concept of ‘altering perception’ thereby altering reality, as for them the levers, the memes of propaganda and control are visibly spread like butter all over our evening viewing rituals with the corporate media, and once identified they lose the power to alter reality.

People behave according to what they believe, thus fashioning reality and our society.

So we can literally reverse this process and alter our collective reality by focusing our attention on a positive state which allows for the possibility of positive change.

Imagine, if we all did this and focused on positive change.

The Apocalypse would be over…in a heartbeat.

Related posts:
3D Printing; Prospects and Pitfalls
The High Cost of Automated Electric Vehicles
The Future Farm is Vertical
Who an Automated Car Should Kill is the Wrong Question
A like is great,but a share goes further.

Caught somewhere between the profane and the prosaic the author assures us all that he, like most, is trapped in a prison of his own making, with gilded neon bars and the machinery of Moloch haunting his nightly landscape of dreams. Increasingly aware of the sharp divide between what I see and feel, and what I do. Trapped in a corrosive System which is ultimately 'Against Nature' and therefore against 'Us'... I see no further benefit in talking about myself and prefer to let my work speak for me.
View all posts by Jules Elbeshausen →