The Conversation We Don’t Have But Desperately Need

We need to have a social conversation about economics. Not the prototypical economic conversation; there’s no need to discuss regulation, interest, inflation, derivatives, or even the type of money we use. Our conversation should instead address the foundation of our modern economic system. Examine our economy from a broad perspective, without getting bogged down in the mire of levers and mechanisms which mask the fundamental simplicity of the system. It’s time we looked at the impacts of earning a living.

To start, we should have a basic understanding of how as a species we have arrived where we are from an economic perspective.

As Homo sapiens, we’ve existed on this planet for over two hundred thousand years.[1] For the vast majority of the human record, our species lived nomadic hunter-gatherer lifestyles with an egalitarian economy. That is to say we shared, the needs of the community were met above and beyond the needs of the individual. Hoarding and restricting access to food made no sense when being on the move to find food was a primary function of one’s culture.

This way of life went fundamentally unchanged until between ten and two thousand BCE (before common era), or between twelve and four thousand years ago.[2] During this eight thousand year period, our species went through the first agricultural (r)evolution, experiencing dramatic change in our social and economic history. We learned to farm.

With farming came job specialisation, a surplus of goods, redistribution of those goods, private property, and more defined rules or social expectations and cultural norms. The ability to remain in one place for longer periods of time allowed for rudimentary housing, the establishment of villages, then towns, and finally cities. As a necessary adaptation to managing larger groups of people living in close proximity, social expectations moved away from being implicit (this is how we behave it is how we have always behaved), to becoming more regimented. These changes gave rise to trade, facilitated by barter, tokens such as shells, precious metals, and culminating in modern money.

While this profound change in human society enabled unforeseen and fantastic advances for our species, taking us from planet bound nomads to space travel, it also allowed for poverty and inequality as egalitarianism gave way to modern capitalism.

It’s important we take a step back to get a broad perspective look at what we’re doing as a species from the confines of our modern economic system. We work, engage in a form of employment, so we can be paid a financial sum for our time and in turn, use those funds to pay to live. This is the fundamental premise of our system, work to pay to live.

For those with relative access, this design promotes participation in the economy driving innovation and social progress. It’s difficult to argue that hasn’t happened. Indeed, since the industrial revolution of the late 18th and early 19th centuries there have been vast social and technological advances, thanks in part to the incentivised participation in the economy. Yet, there are also a plethora of social and environmental pathogens, many being an outgrowth of behavioural propensities directly resulting from our competition based economic model, rising to overshadow the benefits of capitalism in human society.

The questions we need to ask ourselves and each other are, have our advances reached a point which leaves the detrimental outcomes outweighing the positive? And, are the negative externalities of working to pay to live eclipsing the benefits of the participation incentive? Where are we headed as a society if we’re to persist with our current economic model?

As a caveat, it’s important to understand this is not about saying our species should never have learned to farm, or that capitalism was something we should have avoided at all costs. It’s necessary to recognise and acknowledge the social gains made as a result of these historical experiences. What we need to do now, and arguably should have been doing for decades, is consider the social and environmental implications of the system itself as set against the abilities it has afforded.

At times, the causes of social and environmental instability we’re experiencing are suggested to stem from “crony capitalism” (the allowance for preferential regulation and other favourable government intervention based on personal relationships[3]) or, our use of inherently inflationary fiat money. This is a truncated view with respect to the mechanics and causality as they relate to the work to pay to live system, which underpins the market economy. The type of money we use to facilitate trade, or whether a market is regulated or free of legal interference, has no bearing on the need for cyclical material consumption. Without repeat customers, an employer cannot retain market share to produce income and pay an employee for producing or providing a product or service.

With the wages we earn through employment dictating our standard of living, the customary competition between the employee seeking higher wages and the employer attempting to cap or drive down wages results. From the employers perspective, this is an outgrowth of competing to retain market share, in the provision of products at the lowest cost against other similarly positioned companies. Further cost-cutting measures can result in dirty and dangerous production methods, reductions in workplace safety spending, and offshoring of manufacturing to developing nations where worker rights are near non-existent.

Competition also extends to the national level. Developing nations engage in “the race to the bottom” as they slash environmental regulations and labour laws, in an effort to appear more attractive than competing nations to corporations seeking to reduce overheads by offshoring manufacturing. Given such competitive dynamics occurring within the capitalist system, corporations who maximise incentives via regulatory apparatuses are revealed as expressing fundamentally resonant behaviour within this broader context.

Competitive pressure to cut costs is also leading employers to adopt automation technologies as they are proving to increase efficiency, reduce errors and long-term costs. Unlike their human counterparts, machines don’t need breaks, holidays, or sick days. Nor do they require pay increases, join unions, strike, or suffer long-term effects from injury which can attract legal costs. In Australia alone, it’s been suggested that automation could replace forty per cent or five million jobs by 2030.[4] 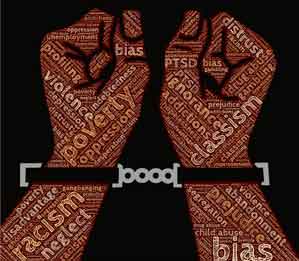 Extreme disparities in wealth distribution are another outcome of the competitive market system. The nine most affluent people on our planet control more combined wealth than the total held by the poorest four billion.[5] This social inequality is linked to an increase in crime,[6] causing negative mental and physical health outcomes amongst both children and adults[7] and having a detrimental impact on the education of children from poor families.[8] Another concerning reality is the finding that the workplace and finances have been found to be the leading cause of chronic stress in the world today, which is the leading cause of chronic disease, and in turn the leading cause of death.[9] All of this an outgrowth of working to pay to live.

The negative outcomes of economic inequality are in part what led Dr Johan Galtung to express, in 1969, that inequality was a form of structural violence.[10] Dr Galtung described structural violence as social arrangements embedded in the political and/or social landscape which result in injury to people, and that is visited upon those whose social status denies them access to the fruits of scientific and social progress. As we come to terms with the health implications of inequality, the work environment, and finances themselves, it becomes difficult not to see this system as structurally violent. This brings into question the idea that our market economy is based on voluntary trade, for what is our choice in a system which is imbalanced towards deprivation, and is culturally installed as the dominant economic paradigm?

Consumerism occurs in human society today without question. Like sharing in our ancient history, material consumption in modern times has become an implicit facet of our existence, “this is how we behave it is how we have always behaved”, even though it’s categorically untrue outside the temporal spans of our own existence.

Indeed, as recently as the early 20th century we see western cultures were not as fixated on materialism as a way of life. This began to change in the 1940’s, at the conclusion of World War II and with the economy having recovered from depression, jobs were abundant and Americans were ready to spend.[11] By the spring of 1955, when Victor Lebow described the importance of material consumption to the American economy, the United States was well on its way to being a nation of consumers,[12] taking the rest of the world with it.

Our enormously productive economy demands that we make consumption our way of life, that we convert the buying and use of goods into rituals, that we seek our spiritual satisfactions, our ego satisfactions, in consumption. The measure of social status, of social acceptance, of prestige, is now to be found in our consumptive patterns. The very meaning and significance of our lives today expressed in consumptive terms. The greater the pressures upon the individual to conform to safe and accepted social standards, the more does he tend to express his aspirations and his individuality in terms of what he wears, drives, eats- his home, his car, his pattern of food serving, his hobbies.

These commodities and services must be offered to the consumer with a special urgency. We require not only “forced draft” consumption, but “expensive” consumption as well. We need things consumed, burned up, worn out, replaced, and discarded at an ever-increasing pace.[13]
Victor Lebow

It’s this rapacious appetite for stuff which has led us as a global society to strip-mine our planet for resources; tearing down forests, cutting away the tops of mountains, and digging holes in the countryside. The extraction and refining of resources has resulted in the pollution of the environment through; the extraction and refining process directly, energy production to drive machinery, shipping of materials and commodities around our planet, and finally, when the created products themselves inevitably become waste. This pollution of the ecosphere is culminating in anthropogenic climate change and ecosystem degradation, threatening the future of life on Earth for our and many other species.[14]

From the simple life of our hunter-gatherer ancestors through to the complexities of our modern economies, the process of refining our social approach has provided our species with prodigious intellectual and technical advances. During this period, particularly since the beginning of the industrial revolution, we have broadened our understanding of the Earth’s natural systems, our own biopsychosocial nature, and the negative impacts of our behaviour. However, with this new-found knowledge, and our unprecedented productive capacity to create abundance, we have not challenged our economic modus operandi.

Failing to do this appears to be leaving us cornered in a progress trap. For all our wondrous understandings we seem to lack the intellectual tenacity to question the antiquated basis of our modern economic system. Even in the face of overwhelming data which describe the deep and troublesome problems with our competitive, and consumption-driven social model, discussion about finding a way to manage society beyond the work to pay to live structure feels taboo.

The next logical step in our economic evolution –with the productive capacity and knowledge we have obtained during this capitalist era, is to transition to a system which better cares for our mental and physical well being, and which nurtures the environment. For this to happen, we must discuss what an economy looks like devoid of the need to work to pay to live. That is the conversation we don’t have but desperately need.