Solar radiation reaches our planet as shortwave radiation, about 30 percent of shortwave radiation is reflected back into space, while the remaining 70 percent is absorbed by the Earth’s surface and re-radiated as longwave radiation. Incoming solar radiation that strikes the earth’s surface is partially reflected and partially absorbed, in proportion to surface reflectivity (albedo). Albedo describes surface reflectivity, a surface with a high Albedo reflects more light radiation than it absorbs, while a surface with a low albedo does the opposite. 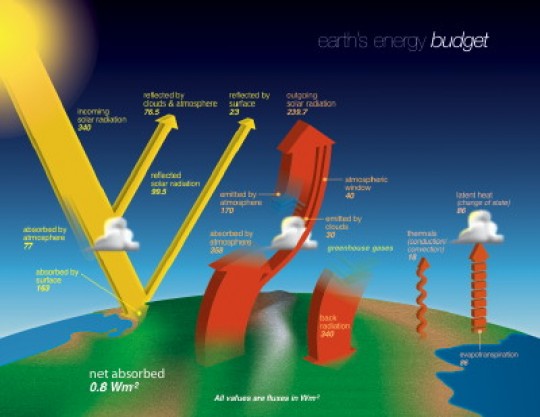 One of earth’s natural cycles is the carbon cycle. Billions of tons of atmospheric CO2 are removed from the atmosphere by oceans and growing plants, also known as ‘sinks,’ and are emitted back into the atmosphere annually through natural processes also known as ‘sources.’ When in balance, the total carbon dioxide emissions and removals from the entire carbon cycle are roughly equal; balance being the operative word here.

If we as a species add even one percent of global carbon to the carbon cycle we are adding a percent that cannot be dealt with by the natural cycle, and will compound each year.

As carbon levels in the atmosphere increase more and more long wave radiation is trapped and re-radiated, slowly increasing temperatures, causing further melt. Early in December of 2011 it was reported by scientists in Russia that they had witnessed plumes of methane escaping from the sea floor, and into the atmosphere as a direct result of ice at the seafloor melting. These plumes cover thousands of square kilometres.

Fountains’ of methane 1,000m across erupt from Arctic ice 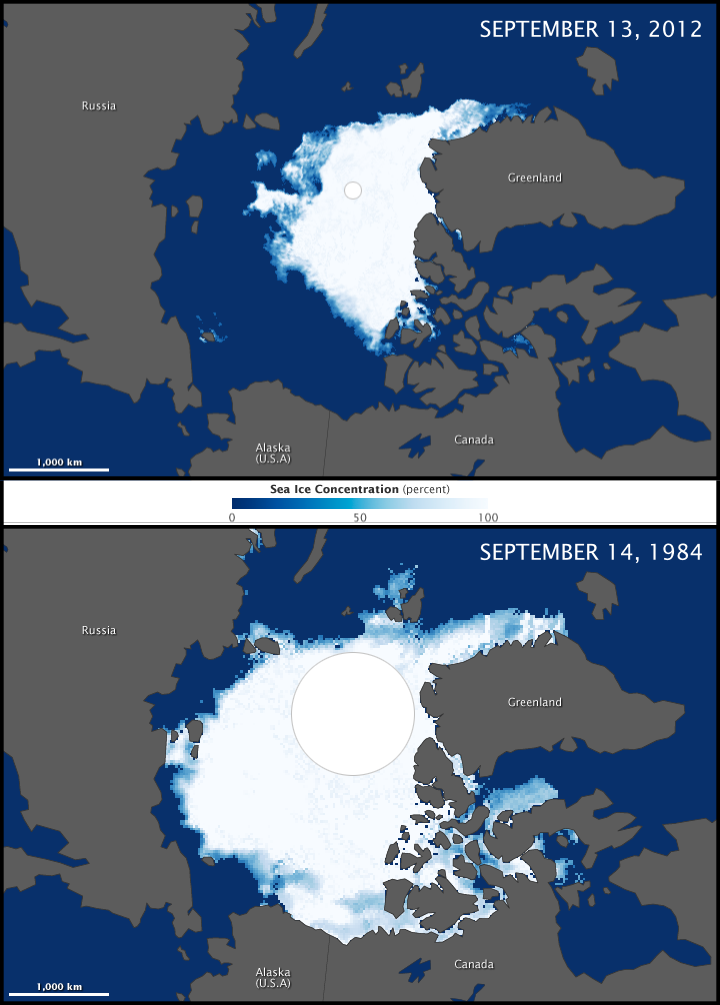 As greater amounts of long wave radiation are trapped in earth’s atmosphere global temperatures begin to rise. This not only increases the rate of sea ice melt but also impacts on ocean temperatures and influences glacial ice melt. Earth’s average ocean surface temperature in July 2009 was the warmest since record keeping began in 1880, breaking the previous high mark established in 1998, according to an analysis by NOAA’s National Climatic Data Centre.

Arctic sea ice is melting, that is a fact. There are those that would debate that this is part of earth’s natural climate cycle, others that would argue it is anthropogenic. Yet as the debate goes on the ice continues to melt.

A NASA/University study published online on February 14th 2010 in Nature Geoscience finds that glaciers in West Greenland are melting one hundred times faster at their end point than at the surface. The melting of glaciers beneath the ocean surface causes deep, warm, salty water to be drawn up toward the glacier’s face, where it mixes turbulently with the glacier’s cold, fresh water. The water then rises along the glacier face, melting its ice along the way, before reaching the ocean surface and flowing away from the glacier in a plume. An ocean temperature of 3 degrees Celsius can melt glacial ice at a rate of several meters per day, or hundreds of meters over the course of a summer. 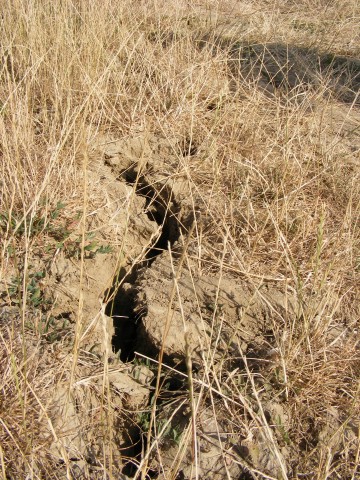 As the water warms sea ice melt increases, resulting in an increase in the amount of longwave radiation re-radiated back into the atmosphere. Longwave radiation is captured by gases such as water vapour, carbon dioxide, and methane, then re-radiated again this time in all directions, including back down towards the earth. The atmosphere warms and itself holds increasing amounts of water vapour, another greenhouse gas. It rains less, the earth becomes drier without irrigation which is already under pressure. When it does rain the dry topsoil can be washed away, further degrading the environment and impacting on agriculture.

About half the world’s population, or in the area of 3.5 billion people, live within 60 km of the coast. It is expected that if sea levels continue to rise at current rates 600 million people and ⅔ of coastal cities will be impacted by 2100.

While there will be mass migration as people relocate to escape the impacts of sea level rise, there will also be increasing pressure on the world’s food bowls in degraded environments. It won’t just be people living on the coast that will feel the impacts of sea level rise. Sea level rise is an indicator of a systemic problem. Ecosystem loss and a reduction of freshwater, these are further signs of systemic failure. Our addiction to carbon fuels won’t just be felt by some of us, those impacts will affect us all.

Related posts:
How the Environment Plays a Pivotal Role in Human Development
Why Blaming The 100 Worst Polluters is A Mistake
A Third Global Coral Bleaching Event in Four Years Leaves Our Future Under Threat
Product Longevity in a World of Consumption
A like is great,but a share goes further.