The Tyranny Of Work 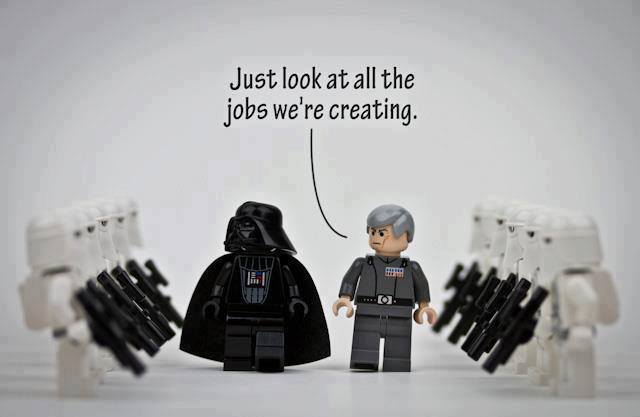 By work, I mean the mundane, repetitive act of getting up before I’m ready, travelling to some office/warehouse/retail outlet, and wasting hours of my life performing menial tasks just so that I can eat and put a roof over my head.

I realise that might sound a little entitled, many people would love to be able to perform menial tasks for money. After all, traditional “logic” dictates that we earn our way by the “sweat of our brow”. Hard work is revered and people who rely on handouts are looked down upon for their laziness and for burdening those who are lucky enough to work. We all need to work to pay our way in society. Otherwise, people would just sit around all day and nothing would get done, right?

Well, it’s just not that simple. Our relationship to work is based on recent historical precedents and cultural perspectives. It hasn’t always been like this, and with the rise of automation, it’s unlikely to remain this way for much longer.

My first job was working for a second hand store. My boss and I would go to the homes of dead old rich people (at the request of their family, I’m presuming) to remove the horrendously stained mattresses, ancient furniture and assorted bric-a-brac. It was a heavy and dirty job, and my lanky 15 year old body struggled with the weight of some of the old furniture, much to the annoyance of my boss.

I’d then spend Saturdays in a cobweb ridden warehouse waiting for people to stumble in and maybe buy a shitty overpriced wardrobe. My boss worked in another warehouse down the street selling the bric-a-brac, so I was alone most of the time. So what does a 15 year old boy left alone in a warehouse all Saturday for weeks on end do? That’s right, I designed video games.

My boss would have preferred I hawk people in to try and sell our wares, and eventually I was fired for not doing so. But I was 15. I didn’t give a shit about his dusty old furniture. I had dreams. The world was beckoning, I was trying to work out what I wanted to do with my life. Arranging ancient cabinets into rows was not it.

The following best part of a decade was a similar story. I worked in fast food restaurants, packed in warehouses, picked in warehouses, filed in offices, drove dumper trucks, sealed tissue packets as they came out of a machine, held yogurt pots in place as they came out of a machine, all while dreaming of creating something. Why did I do these mundane jobs? Because I needed money, and I had no “marketable” skills.

The whole time, I dreamed of doing something better. Something meaningful, something creative.

I’d played with computers for years, writing software but I was never at a professional level. In the free time between working and getting drunk with my mates like most 20 year olds, I would study. I learnt how to program properly.

Eventually I landed a job where I was able to put the programming to some use, building business applications. It was fun, I realised it was what I wanted to do. That was the point where I realised jobs didn’t have to be mundane and boring. Once you acquire a skill that people are willing to pay for, you can make that your vocation, and in a way, you become in control of your own destiny.

It was a revelation. I became good at development, and have since built a solid, well paid, and rewarding career. But it’s not even just a case of finding a good career. The job market is a minefield of pointless shit, disguised as a worthy use of time.

It was draining, working in a boring second hand shop. Any activity you’re not interested in can be hard on your soul. It is however, nothing compared to working in an industry you believe shouldn’t even exist.

I love my craft. But I spent hours, days, weeks, analysing complex technical problems which basically boil down to changing someone’s email address on a share registry. I worked in a company of several thousand people, managers, testers, developers, business analysts, executives, administrators, handymen, restaurant staff, and who knows what else. All of them, working for the sole purpose of managing the personal details of shareholders.

This is humankind’s biggest, most tragic waste.

It’s difficult to imagine anything more pointless than the stock market. Shares, options, derivatives, bonds and other financial products add another layer of abstraction to the already abstract concept of money. They produce nothing of value. 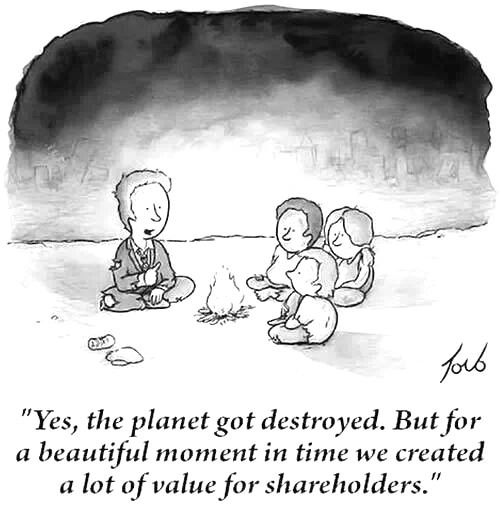 As soon as I could, I got out of the finance industry. Luckily software development lends itself to many industries and I was able to find a job working for a small but highly innovative software company, where customers’ needs are the focus, and creating value is valued.

It’s another world, having a job where your skills are are being put to good use, creating something of value for society. It’s inspiring and motivational.

But, I am extremely lucky. I also had the presence of mind to make a conscientious employment choice. Very few people have the luxury to choose their employment, if they have any employment at all. Yet society demands that everyone does something, even if it is a poisonous waste of their time and talents.

When you step back and look at society, it becomes obvious that we’re on the wrong track. We’ve done great things; space travel, science, the internet; and we’ve alleviated suffering for at least some of the population. But at the same time, large swaths of society are moving numbers around in a bank, betting on the price of financial products, or making sure some old rich guy has a couple of million more than some other old rich guy. Then there are other industries built around these pointless industries – financial software, accounting, consultancies, lawyers.

There is just so much time, intelligence, and human happiness squandered.

You might argue that some of these are a necessary auxiliary to the complexity of our society, that they help people chose the right car, sell their houses, and these are important industries themselves. Even if you’re right, there is also a shameful amount of redundancy between competing brands.

I feel that we can do better.

The way that society is currently structured forces most of us into work. If you’re lucky enough to have a job, and like it, and do the hours you desire, then you’re very lucky indeed. Very few have this luxury.

Instead, most people only work because they have to. Most people don’t do what they love, but they may settle for something they don’t mind. If you’re good with people, you might work in HR. Would you “work in HR” if you didn’t need the money? I doubt you’d do it for 40 hours a week.

We settle, and we’re not fussy about the industry we work in. We don’t question our industry, as much as our job. We need to ask ourselves if we would still be doing this job if we didn’t need money. If the answer is no, we’re wasting our time.

It’s a hard pill to swallow, especially when you don’t really have a choice. Bills to pay, right?

This is the trap that society, as we have constructed it, creates. In our eagerness to earn enough to “live”, we have built a pointless universe of derivatives, insurance, mortgages, middle management, middlemen, and stock markets. And this universe distracts us from what is really important – family, health, fun, creativity, art, technology, science. Our current social order forces our industries to neglect these things, at least most of the time. Millions of us waste our precious intelligence and creativity, reduced to worker drones.

There is plenty of useful work to do, which is not happening. We could be building better infrastructure, running community programs, taking better care of the frail and the depressed, working with the ecosystem instead of against it.

If the millions working in finance were freed to work in health, engineering, science, care, education, technology, and art, imagine how much better off society would be. Imagine how much happier we would all be.

That’s why I hate work. It takes up so much precious time of so many precious people. It’s forced on us or else we starve outside. For too many of us, it’s soul draining, and meaningless.

Without it, we could be so much more.