Vertical Farms Can Feed the World

There is no need for anyone to be suffering malnourishment. We can feed more than ten billion people on our planet using vertical farms.

Our current global population is in the area of 7.3 billion souls, some 795 million are undernourished and are unable to lead a healthy active lifestyle. That is about 1 in 9 people. This is a symptom, not of overpopulation* as many tend to think but of poverty, which we have argued is an outcome of using money in society, resulting in material waste and inefficiency. Near to fifty-five percent of the food we produce is used to feed cattle, make fuel, other materials, or is thrown away as waste.

*To better understand why overpopulation is not the problem some may think it is please see either our article “Understanding Population Limits” or watch our video “Technology, Population and Behavior; Connecting The Dots”.

Our traditional farming practices are inefficient, result in loss of habitat for biodiversity, and the food transportation requirements are feeding anthropogenic climate change. If we are to persist with these methods the resulting damage to the biosphere will lead to a dramatic increase in the numbers of people suffering from malnourishment.

The Future of Food Production is Vertical

A vertical farm is a building in which the produce is grown vertically on top of each other in a controlled environment. This type of farming in a controlled environment comes with many advantages, one being the extreme reduction in the need for pesticides, herbicides and fungicides. They are also immune to the effects of extreme weather events such as; drought, flooding, frost, hail storms, monsoons and hurricanes to name a few.

As the farms are constructed in built up urban areas there are vast savings made in resource intensive transportation systems, allowing what was once agricultural land to be returned to its natural state with overall positive effects for biodiversity.

Wind turbines, solar panels and rainwater collection systems can all be put to use in the vertical farm, greatly reducing energy consumption and dependence on city water infrastructure. The lower levels of the vertical farms can house fish species which eat the plant waste, nutrients used by the plants are collected from fish waste and human sewage. The fish can then be harvested reducing strain on fisheries, again improving outcomes for biodiversity in the natural environment.

Crop yield is greatly increased in a vertical farm, as demonstrated in Singapore by Jack Ng of Sky Greens. The Sky Greens vertical farm, “A-Go-Gro” six meter tall A frame tower technology, contains between 22 and 26 growing troughs and takes up 5.5 square meters of space per unit, generating in the area of 2.1 kilograms or 4.7 pounds of fresh vegetables each day, year round.

This system of food production outperforms traditional farming in every way.

The Problem with Vertical Farms is Economic 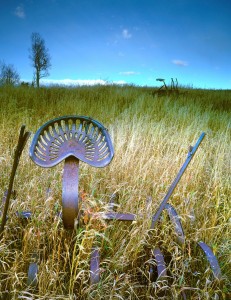 The downfall to vertical farms is based on unemployment, which as we have outlined in a previous post is a symptom of our failing economic system. Growing and distributing food through automated vertical farms would have a detrimental impact on traditional farming, the supply chain and current fresh food markets.

The question we need to ask ourselves is: if we have a technical solution to malnutrition and food security does it make sense to let our system of economics prevent it from being put in place? At what stage should we decide that it is time to alter our economy to come into line with our technical abilities and understandings?

As we have presented in the past, automation is going to have some significant effects on society, and it is going to happen sooner than you think. Unless our disposition is to continue to see suffering on our planet, the time to start moving towards a new system of economics is now.